A Server Score bonus is given based on the votes over the last 7 days.

That is probably one of the most overused server descriptions in Minecraft Multiplayer history, but this server is far more than that. We aim to create a gameplay experience that is centered around Towny and its community creation capabilities. We plan on bringing Towny to the modern Minecraft server scene, with all the features we have grown used to and some more. But we will also keep balance as our goal. Access to plugin commands and functions will be tailored to enhance the gameplay without killing the difficulty of the game. The best way to describe our approach to gameplay would be Vanilla+.

We have a fully rendered custom generated world that will bring Towny and player creativity to new heights. No client-side lag, and no server-side lag. The most beautiful beaches you have ever seen, surrounded by awe-inspiring mountains and brought to life with lush forests to get lost in. All while still feeling like a Minecraft world.

The players drive the economy. No Admin shop, no P2W features. However, there is another, very important, agent in Advanced-Kind’s economy. The cities themselves. Towns will be able to choose from a variety of production centers to build and upgrade over time as their population grows.
Mines, sawmills, farms, and much more. All unique advantages to living in a town, custom coded, and exclusive to our server. They will provide a source of regenerative resources that will re-balance gameplay around them.

Those who wish to explore the world in search of resources will still be able to, but as time passes towns will grow in production capacity while natural ores dwindle.

Advanced-Kind was started by Towny veterans and it's intended for both dedicated Towny & Factions players and for anyone looking for a welcoming community. We are open about our policies and actively seek feedback. With a well-organized ticket system and feedback channels, you'll always have a place to express your opinion.

Bloated and impossible to navigate webpages/forums are a thing of the past. Enjoy the best elements of the community from the comfort of our Discord Server. Useful information, server-chat integration, public moderation record, ticketing system, fun minigames, and much more!

Advanced-Kind was envisioned by Minecraft-Towny veterans. We have lofty ambitions to make meaningful improvements to the tired multiplayer formula of SMP-Towny. This is a passion project for us. Resources are limited, so while you won’t find the flashiest features such as layered NPC quests or custom textures, we will keep the experience balanced and as polished as possible.

• Towny! (With custom upkeep and claims numbers to balance gameplay).

• McMMO (with a more rewarding level-up scale than usually offered).

• Brewery! (Boil, distill, and ferment your ingredients into drinks such as ale and beer! Get special modifiers and a cool chat effect when drinking them or get rich by becoming a Master Brewer once you discover all the rare combinations of ingredients and fermentation barrels!).

• TownyMines! (Create and level your mine as your city grows!). Towns Exclusive Feature

• Bookshelves+! (Place enchanted books on the shelves surrounding an enchanting table to increase the likelihood of that enchantment appearing!).

• Hostile Mobs+ (Mobs spawn with a chosen lvl from 1-10, going from vanilla to a slight challenge to make things spicier when going out. Think twice before going out into the dark!).

• Auction House (Place your items on /ah for everyone to see at any moment or even start your own Auction for players to bid on!).

We have lots of features and most of them are explained thru our in-game NPC tutorials. However, we have tried, whenever possible, to give players the chance to skip them so no one has to bother with a feature they don't enjoy.

It is a really good server and community

its just agreat place to hang out and biuld stuff

Really fun server you should come check us out! :D

New Towny server. Nice people and there are openings for towns still!

Did you play on Advanced-Kind?
Give your feedback:

First off I want to make an announcement for . From now on we'll reduce the amount of global pings. We'll only do 1 for our weekly Reddit post and in case of heavy maintenance.

You are encouraged to visit: Discord so you can get a notifications role.

- is used for updates that include new features.
- is for minor changes and bugfixes.

Now to the news.

To celebrate our first month we've prepared a Teaser Trailer for the server! www.youtube.com/watc...ab_channel=Advanced-Kind It doesn't include towns just yet, since we're saving that for future trailers, but I think it's pretty damn nice imo ;)

We also now have a webpage! <web.advanced-kind.com/&gt... and with it the commands /web and /webpage !

Remember that you invite your friends to the server and get rewards for it! You just need to ask them to do /ref yourname as soon as they join. We have also reworked the Discord channel and updated some others.

About staff applications, they will remain open for now but the format will be changed soon. Keep in mind that we prefer a smaller staff team in ADK to prevent bloat so apps will be closed soon. 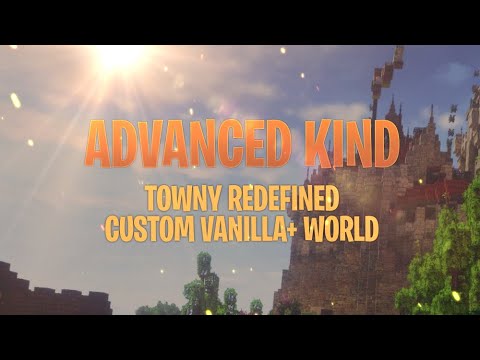 -Updated MCMMO wiki.
-Fixed exploit with Safarinets.
-Minor tweaks to improve performance even further.
-Fixed issue that would cause nick names to not display on log ins and outs.
-Certain Town ranks losing outposts when leveling up.
-Chat games will no longer display "Game ended" before the game actually ends.
-Milk now adds saturation as well.

There is no post about Advanced-Kind on the Blog yet.